The Population and Housing Census is held every 10 years. Since the establishment of Malaysia, 5 censuses have been implemented.

Get a comprehensive and detailed resident and housing stock at a time for the demographic and socio-economic characteristics of the population.

Resolution on 2020 World Population and Housing Census Programme adopted by the ECOSOC (10 June 2015) to ensure the member states to conduct a census during 2015-2024 period.

Principles and Recommendations for Population and Housing Censuses, Revision 3, UNSD (2015).

Household members who have or will stay with other members of the household for a period of 6 months or more in the census year, although no current census is conducted. 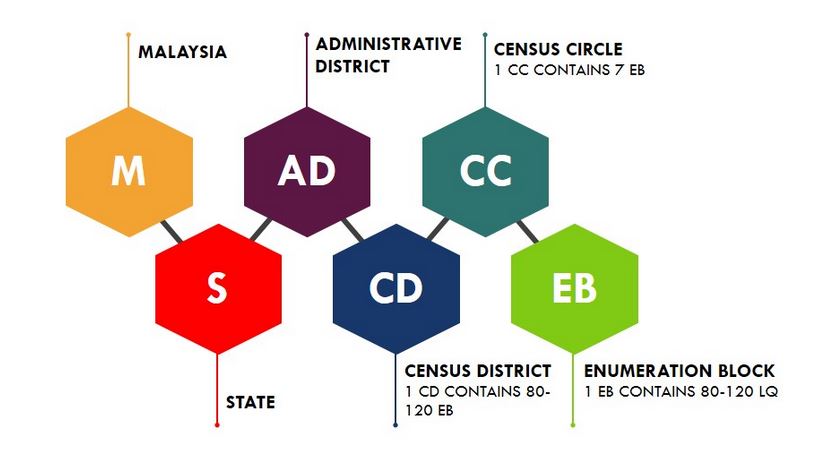 The Population and Housing Census aims to obtain comprehensive and detailed stock and profiles of residents and housing at one particular time as a benchmark for the demographic and socio-economy characteristics of the population. Census data will be the foundation in monitoring population and housing trends for national development planning.

The Population and Housing Census of 2020 is using the ‘de jure’ approach which means that everyone is counted on the Census Day (July 2020) according to their usual place of residence.

The concept of ‘de facto’ means that everyone is counted according to where they are at the Census Night.

Census Day, the period of implementation of the Census, Timeline

To set the Census Day date, the date is preferably free from celebrations, monsoon winds, general holidays, Ramadhan, Aidiladha and any major events that may cause high population mobility. Based on these factors, the census date proposed is in July of 2020. However, the Department of Statistics has carried out census planning works since 2016, through activities such as census framework updates and map digitisation, preparation of the questionnaire, survey enumeration mode research and census-related human capital development.

Year and Date of Census